Nowadays, a large amount of the energy that we consume comes from non-renewable sources, mainly fossil fuels. The consumption of these resources implies the release of gaseous compounds affecting negatively the human health and aggravating climate change, among other effects.

On the other hand, the renewable energies come from non-exhausted sources of energy, mainly from solar radiation and Earth’s internal heat. The use these energy sources reduces the environmental and economic impacts. During decades, the technologies related to renewable energy sources have been improving. In the next sections, only mature technologies offering high efficiency together with reasonable prices are presented.

The residual biomass (faeces, forest, agricultural and domestic wastes), the ones generated in energy crops or the organic fraction of the municipal solid wastes and sludge from sewage treatment plants (to obtain biogas and biofuels) produces gas, liquid and solid that can be used as fuels.

Biomass as an energy source produces less emissions than the conventional resources, such as the natural gas or coal. In addition, the resource exploitation of the forest biomass has not a significant environmental impact, due to the CO2 released into the atmosphere during the combustion has been previously captured by vegetation and, therefore, the final balance is null. Its use also reduces the sulphurs (SO2) and nitrogenous oxides (NOx) emissions released into the atmosphere.

The agricultural and forests wastes, after being transformed in several processes, produce products that have different applications. Directly, the forest and agricultural wastes can be considered as an energy source for heating in the construction sector, both for individual and collective installations. Through the combustion treatment, vapour is also generated, that can be used to produce mechanical energy in a turbine and also to move a generator and produce electrical energy. Through biologic and termochemical treatments, biogas and fluid fuels can be obtained and used in alternative engines and gas turbines to produce electricity.

In the construction sector, biomass boilers have had a considerable progress in the last 20 years. Modern biomass burn biomass of high quality like wood chips, wood shavings, pellets or agricultural and uniform agroindustrial wastes, without smoke and emissions comparable to the ones released by the diesel and gas modern systems. The current technological development of these boilers allows the automatic cleaning of the exchange surfaces and ash extractors. These heating systems can be combined easily with solar thermal systems. Modern biomass boilers use up to 90% of the energy contained in wood for heating, as good diesel or gas boilers do.

Unlike other sources of renewable energy that directly or indirectly depend on the influence of the sun, geothermal energy comes from the heat produced inside of the planet. Geothermal deposits, if managed correctly, can maintain their energy production indefinitely. This energy comes from internal dynamics of the planet in very specific places, where the calorific flow can be up to ten or fifteen times higher than normal.

This energy source can be used both to provide heat and to produce electricity. Usually, the available technologies are divided in three categories: geothermal power plants, direct-use applications and geothermal heat pumps.

The direct use applications are those that are used to heat or to produce hot water for industrial, agricultural or residential uses. For example, geothermal energy is the second most used source of energy that gets to heat a total of 85% of the buildings.

Geothermal heat pumps use the energy of shallow soils to heat and cool buildings. A heat pump of these characteristics consists of several tubes buried in the ground, a heat exchanger and a duct system inside the building.

The main idea to obtain calorific energy from the subsoil and transfer it, through adequate systems, to buildings as well as transferring the non-necessary energy again to the subsoil. The constant temperature of the soil, ranging from 10 and 16ºC at 10m of depth, offers the optimum conditions to operate, in an integrated way, the heating and air conditioning system of a building. Furthermore, when having the suitable characteristics, the seasonal accumulation of heat energy in the subsoil is possible.

Currently, there is a massive absorption technology known as "geothermal foundations" or "thermoactive foundations". It takes advantage of the energy potential of the subsoil through the foundational elements of the buildings. It is based on the properties of storage and thermal conductivity of the constructive elements of construction, such as foundations, forged, etc.

The principle of solar geothermal energy is based on the fact that part of the radiation that comes from the sun accumulates as heat in the Earth's crust. Due to the large mass of the Earth, the temperature stays almost constant from about five meters deep, at 15ºC.

The geothermal application consists of using the heat energy contained in the Earth's crust at depths of up to 100 meters, through a well-drilling system, a geothermal exchange unit (UGI) and a heat pump. The energy of this stable source (about 15ºC) is transferred to another one of higher temperature (50ºC) that allows its later use to air conditioning as well as to obtain hot sanitary water. Heat pumps are reversible: they can be used as an integral solution for the air conditioning of any space.

The energy efficiency of this air conditioning system or relationship between the consumed and produced energy by the system is highly favourable. At least, it is a 400% for heating and 500% for cooling (this means that the released energy can be up to 5 times higher than the consumed one).

The use of energy from the sun to generate electricity through silicon cells is one of the technologies which have evolved the most in the recent years. The performance of the photovoltaic collectors has been improving and nowadays, represents a quite profitable investment if having a proper regulation.

The components of an installation are: the collector, the charge regulator, the inverter necessary to convert direct current (DC) of collectors to alternating current (AC) 230 volts, protection devices to improve the safety of the installation and measuring devices in order to know the amount of energy generated in every moment and batteries in case of an isolated installation. 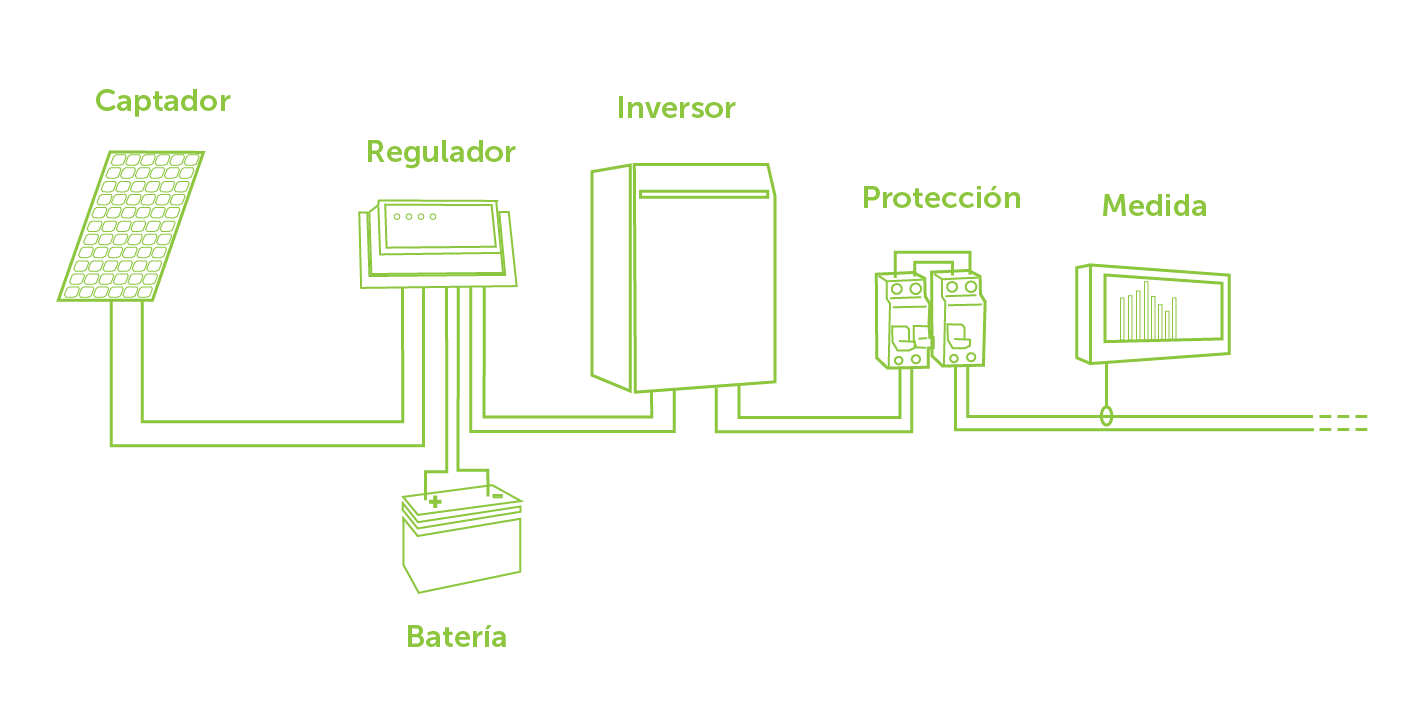 Most of the photovoltaic solar collectors currently used are made from silicon cells, one of the most abundant elements in Earth. These cells have the property of generating electricity when they are illuminated by the sun. All the cells in the panel are connected to each other in series. Thus, they can add their power (current and voltage), until they reach the nominal power, current and voltage of the plate.

The electrical characteristics of photovoltaic solar panels vary depending on the solar radiation that arrives. The power rating of panels is measured in watts-peak (Wp), which is the power that can generate the panel when it is subjected to a standard sun exposition, set at 1000 W/m2 and at 25°C of temperature. A panel of, for example, 40Wp, will produce 40Wh of energy if receives this nominal radiation during one hour. If the sun exposition reaches lower intensity, it will need more that one hour to produce 40Wh. Therefore, it is necessary to introduce the concept of peak sun hour. One day may have 10 hours of sun, but it may only have 4 of peak sun hours. This value is obtained by dividing all the sunshine energy of that day (Wh/m2/day) by 1000W/m2. Hence, to know the energy produced by a panel is not possible to multiply the power (watts-peak) by the number of hour of sun per day. For instance, adding all the energy that the sun gives during a day only amounts to about 5 solar peak hours in summer and between 3 and 4 in winter (at a 41° latitude).

A possible problem with photovoltaic solar collectors is their integration in buildings. There is an ideal orientation for each location that maximizes the production of electricity, but this implies breaking the aesthetic harmony of buildings (in some cases).

There are many possible cases and the clients’ opinion and regulations must be taken into account. However, many professionals opt for a good integration in the building although the production of electricity becomes less. This facilitates its implantation and, therefore, more buildings will choose to use this energy source.

In a Mediterranean climate, the use of thermal solar energy could supply up to a 60% of the hot water consumption of a standard family. These types of facilities are currently tested and refined and can guarantee a good operation and performance, when the provision of the use conditions, sizing and assembly are correct. Hot water is one of the main energy consumption of the domestic and services sector (of the order of 27%). If this application is covered with solar energy instead of the conventional ones (electricity, gas, gas-oil...), the reduction of the energy bill and pollution produced can be really significant.

The water circuit is divided in two parts. There is a water circuit that passes through the collectors and it is heated with solar radiation. This water goes through a heat exchanger and preheats the water that will be consumed. If necessary, the support system can warm the water until it reaches the temperature of consumption. 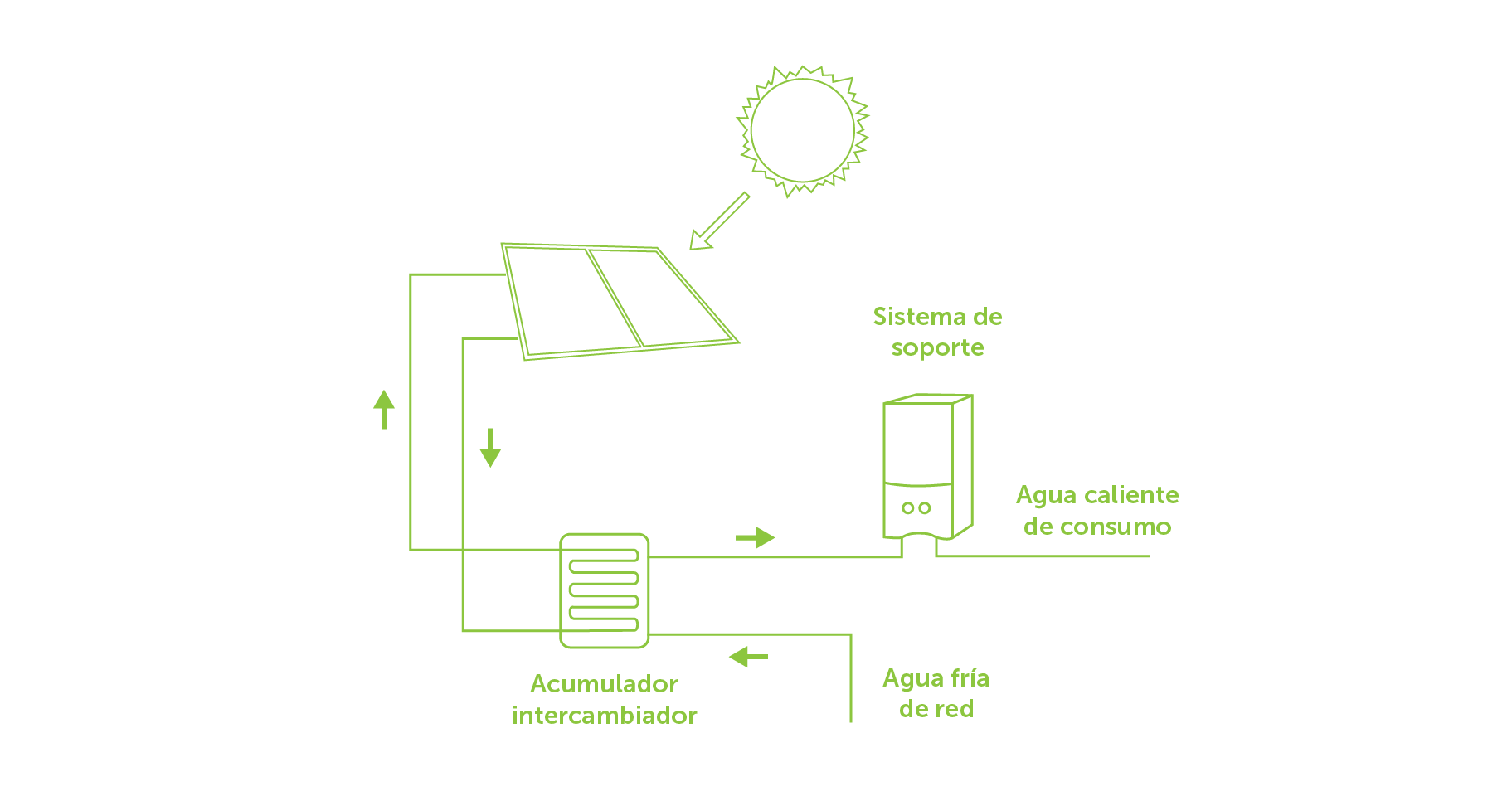 The production of hot sanitary water is the application of the solar energy that, for now, is more extended and profitable. Due to the relative record of the demand for hot sanitary water, the solar installation is operative the whole year, which allows it to be amortized more quickly than in the case of heating applications, in which the system is only used during the winter season.

Thermal solar collectors can also be used for heating, but since they have a seasonal use it is recommended that they only cover a small part of the heating demand (15-25%). This system can be used to produce hot water during the rest of the year.

Warming swimming pools is another interesting application at low temperature. The necessary collecting area can be calculated based on the surface of the pool to be heated and the climatic zone where it is located. In our latitudes, a minimum surface area of 30-50% for collectors of the total pool surface is usually required, depending on whether it is located in a warm (coastline) or cold (central Catalonia) area. The fact that the working temperatures are low and the usual period of very favourable use (the months of more solar radiation) make possible for these installations to be quite simple. It has the advantage that if used directly, it does not require the use of antifreeze devices and enables the use of systems where the water of the pool is heated directly without the need for an interchange, inserted into the circuit of the purifying filters and some regulation valves, managing to increase the temperature to the optimum comfort.